TLDR: My ideas revolve around improving the fundamental character building of Diablo II. Bringing back melee classes by adding AOE into 4 of the classes (Barb, Druid, Pally, Amazon.) Reworking some of the least used skills and giving them new life without changing the classes too much. Adding more items that can open up new builds for people to experiment and have fun! Adding new portals similar to the cow level. Increasing the size of some areas. Rebalancing all 4 of the helpers. Finishing Act 4.
Please keep in mind this page was just designed for entertainment purposes. Hope you enjoy reading! - Derek

Amazons Javelin tree is great, it is arranged in a weird order. Passive and Magic needed updates.

Martial Arts assassin has always been a difficult class to play, needs to be updated!

Barbarians need a little help in the AOE department.

Druid needs some changes in summoning skill tree, and minor tweaks in other 2 skill trees to be an amazing class.

Necromancer struggles to level at a few points. Some minor tweaks can improve them without making them too strong.

Sorceress is already a really powerful class, but a few minor updates could make them have more builds options!

Some areas need to be bigger. It gives move options to level or Magic find!

A lot of things can be done here. This is just a few of my ideas.

After you Defeat Diablo, more NPCs should appear in all of the towers, that have different/new interactions. 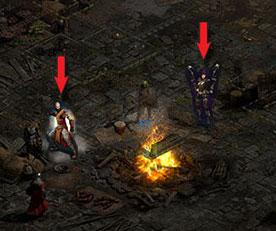 Give more options for builds by pushing some stats into charms!

Change a few of the current rune words, so more uses!

More items with sockets, that have big variables that can match the strength of runewords!